For my upcoming confinement this time, I’ve decided that it is more fuss-free and convenient to have my meals catered instead of having my mum-in-law cook them for me. This gives us all one less thing to think about so we get to focus more on the baby – and I get to try a wider variety of dishes every day!

After asking other mums on the 2017 FB group for their reviews and a colleague who had her meals catered during her last confinement, I shortlisted 2 vendors to choose from: The Natal Kitchen and RichFood Catering.

I discovered that The Natal Kitchen (TNK) is quite aggressive in promoting their services and getting their brand known, especially among the mummy bloggers and the baby fair goodie bags. I’ve received 2 mummy goodie bags so far, and in both, there’s a TNK voucher included. On the other hand, I’ve received great reviews on RichFood from the mummy groups – most of them agree that the dishes are tastier than other caterers and that it’s worth the money as their portion is quite big. Only thing that it can be a bit oily for some.

So, to find out for myself and settle for one, I decided to order the trial meals for this weekend and the next.

For this weekend, I went for The Natal Kitchen. 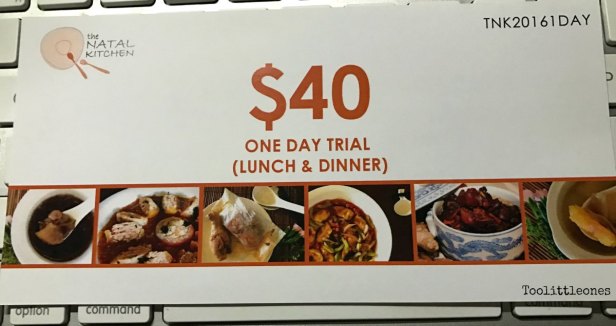 I had a voucher which entitles me to $40 for both lunch and dinner (usually it’s $30 for lunch OR dinner). So I emailed them and quoted the promo code to arrange for the trial meal to be delivered to my place this weekend.

Since my place is located near their kitchen, mine was the first delivery stop. I received my lunch order at around 10am, which came nicely packed in a cooler bag to keep it warm. The delivery person told me to keep the bag and return it to them when they send the dinner order that evening. 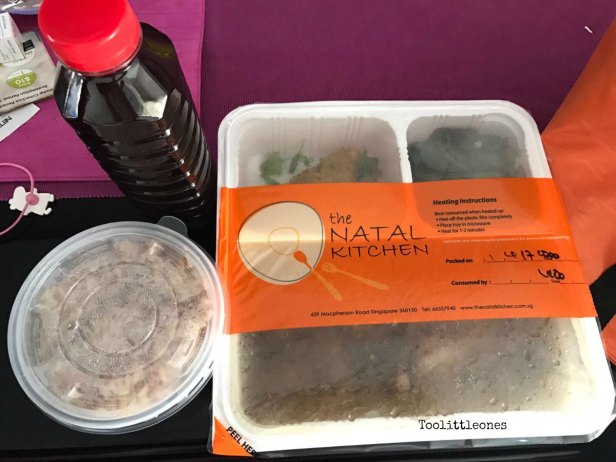 For this meal, the items included are a bowl of brown rice, salmon tumeric, stir-fry emperor vegetables with ginger and herbal chicken soup. There’s a bottle of red date longan tea included as well, and this come with every meal.

Although the food came in microwavable boxes, I transferred them to regular dinner plates and heated it up in the microwave. 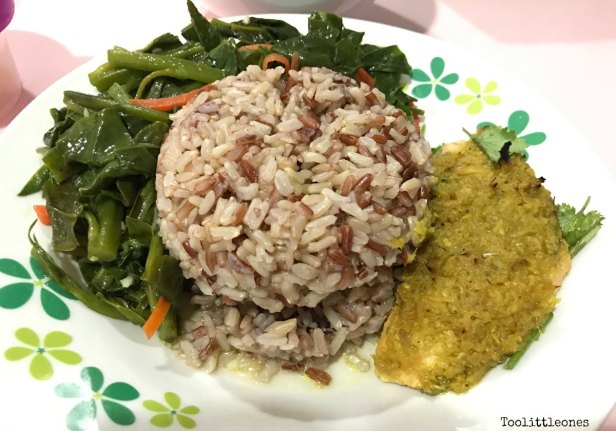 The portion of the food was quite big, for me! Although the size of the salmon was just nice (and tasted yummy too!), the rice and vege were huge. Gave some of the rice to Crystabel since she loves brown rice, and still I could not finish it. And I struggled with the vegetables too, although I passed some to Crystabel and hubby. Hmm, maybe things would be different on the actual confinement day as I would be breastfeeding by then.

Although it doesn’t look like much, the herbal soup with a piece of chicken wing was quite a big portion too. It filled up this soup bowl and about a quarter of a second soup bowl which I gave to Crystabel. Taste was quite good too – the herbs and ginger taste were quite strong.

Dinner was delivered quite early too, around 4pm+. Since this would be the last trial meal with them, they took back the cooler bag and just handed over the meal in a plastic bag. 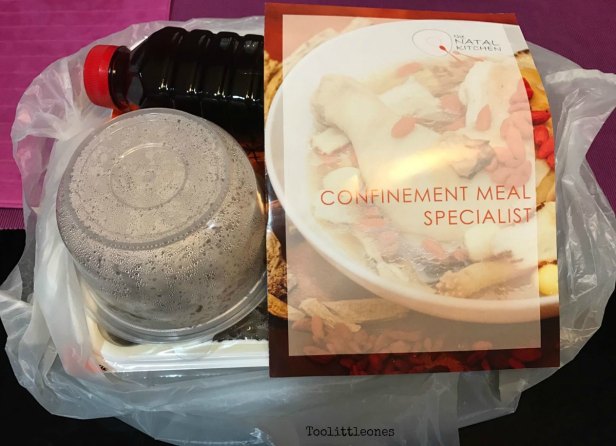 Everything was packed in more or less the same fashion, only this time they included a brochure on their confinement meals.

Since I only got to eat my dinner at around 7pm, I simply transferred them to a plate and bowl to heat up in the microwave.

This time round, I had mixed feelings about the meal. Although the chicken portion was generous, I later found out that there was a slice of dang gui in each piece. When I emailed to place my order, I specifically gave the instructions to ensure that the dishes do not contain ginseng or dang gui as I could not consume these herbs now during pregnancy. They acknowledged my request, but seems like it was missed out for the dinner meal.

As for the “vegetables”, I feel that it’s more of a carb dish of vermicelli noodles with bean curd, black fungus and carrot slices. Hmm…where is the fibre? 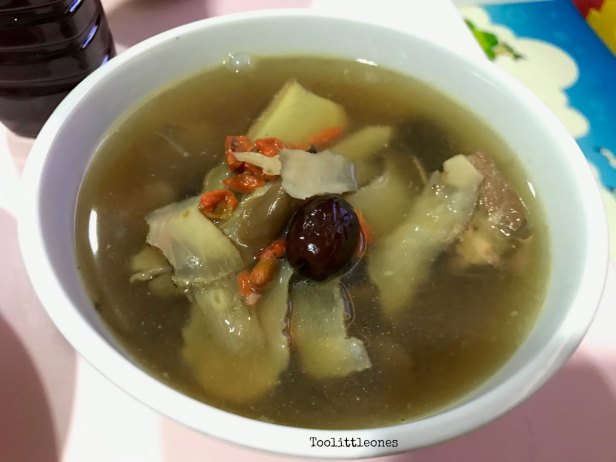 Soup was the herbal soup again – only this time there was pork chunks instead of chicken wing. Seems like a repeat of the day’s lunch soup, although taste was still good. Not sure how I’ll feel having the same soup for both lunch and dinner on a daily basis.

If you are keen to give them a try before signing up for a package, here’s what you have to do:

Note: For good measure, you can include the picture of the voucher which can be found at the top of this post 🙂

I will be trying out RichFood Catering – so do watch this space for my review!

Get to know me!

Hi, I’m Justina – a full-time working mum to two beautiful kids: a bubbly girl who talks non-stop and her little bro, our rooster baby. Thanks for stopping by my blog, which I plan to fill up with stories and the many amazing moments of motherhood.

Feel free to drop me a line at toolittleones@gmail.com.